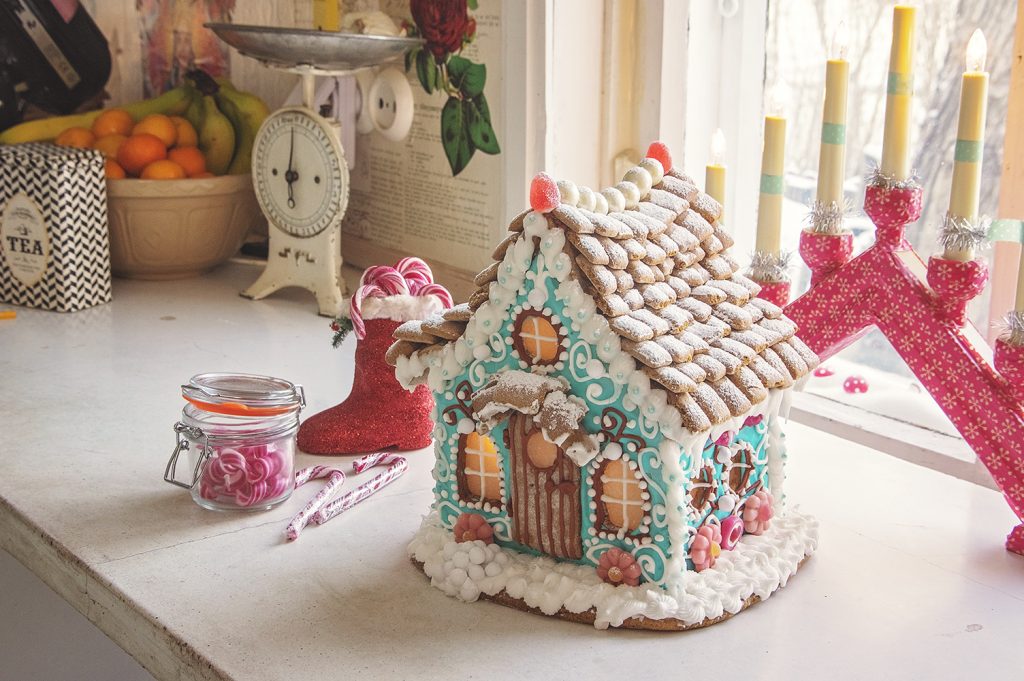 This year I wanted to try something new – to make a wonky rooftop that you sometimes see on Fairy Houses (made for the garden, or such). But this one turned out not wonky enough, and it might be inhabited by a tiny tomtenisse! We can see lights twinkling from inside the house at night, and he has even made sure there is candy left around the house for any helpful nice child that might pass by…! 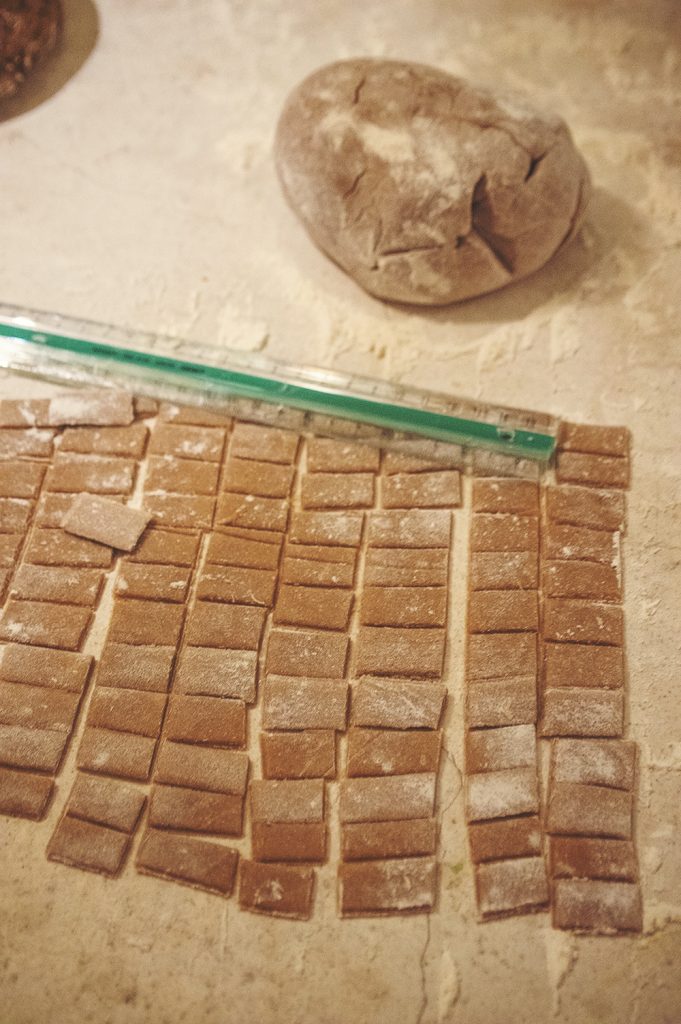 The roof shingles are made out of gingerbread. I just cut out strips about 1 cm wide, and then cut them using a ruler (not as a measuring device, but as cutting – it as a long edge so you can cut long stretches with it). 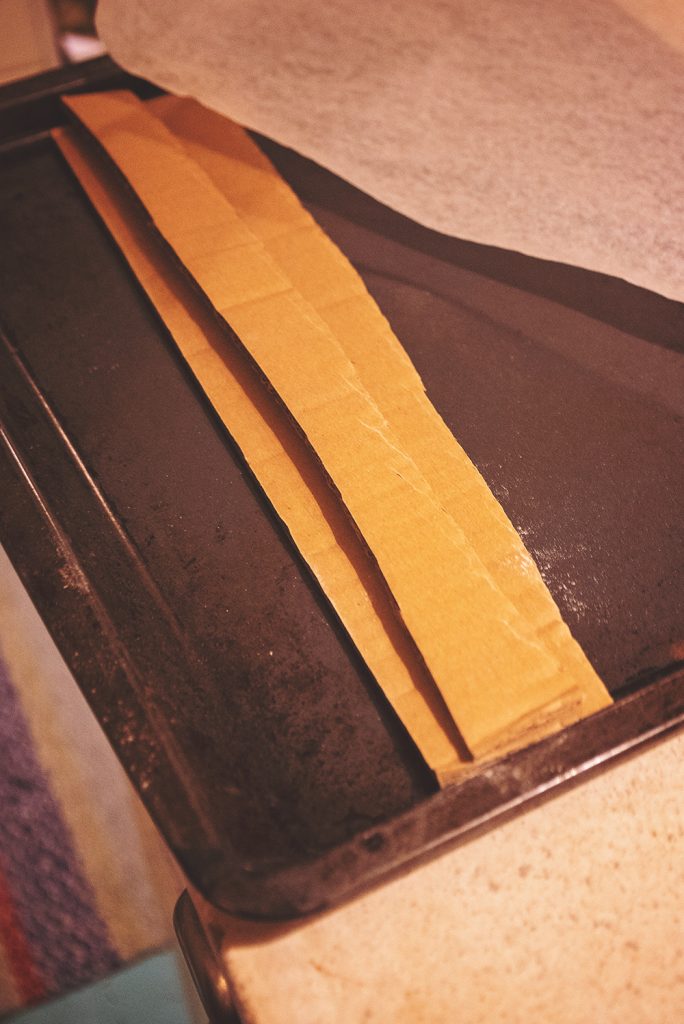 I decided to try to bake the roof parts using some cardboard to prop them up. This turned out to be quite unnecessary! If I do this kind of roof again, I’ll just bake the parts as they are and then prop them up on some support like this when they’re cooling. 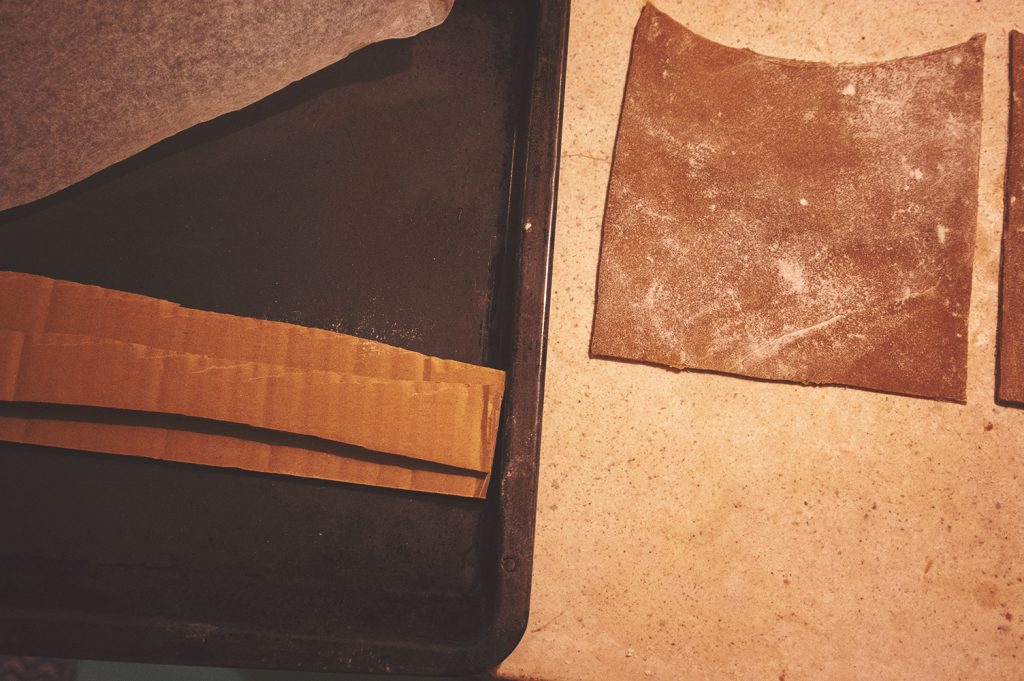 The parts for the roof ready to go into the oven. 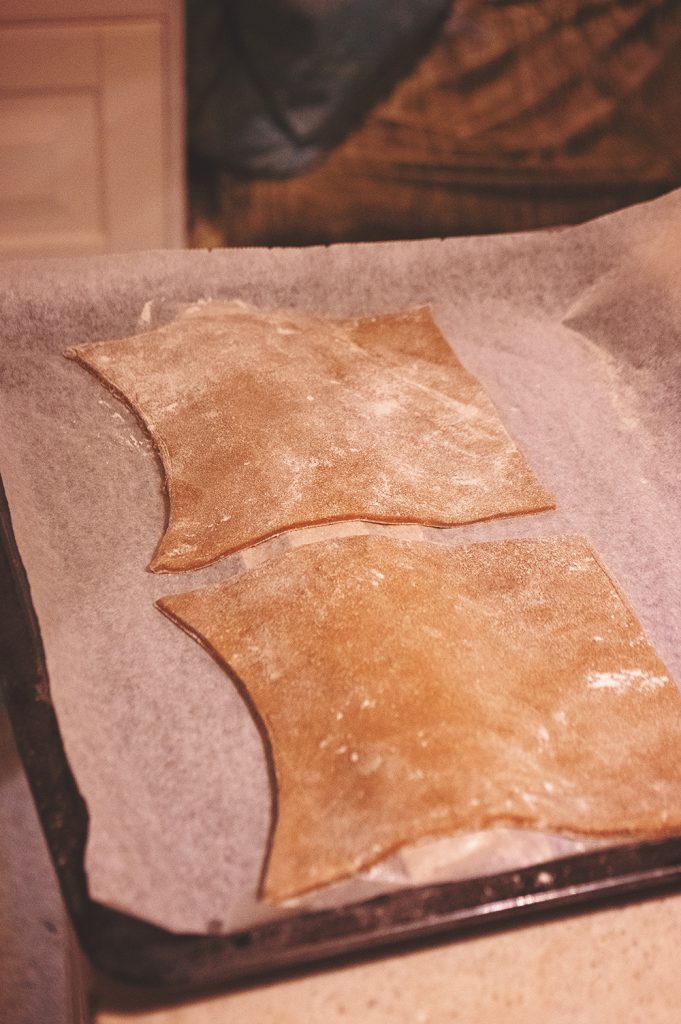 The idea was to make them a bit wonky, to make this sort of woodsy feel. As I said, this was quite unnecessary! 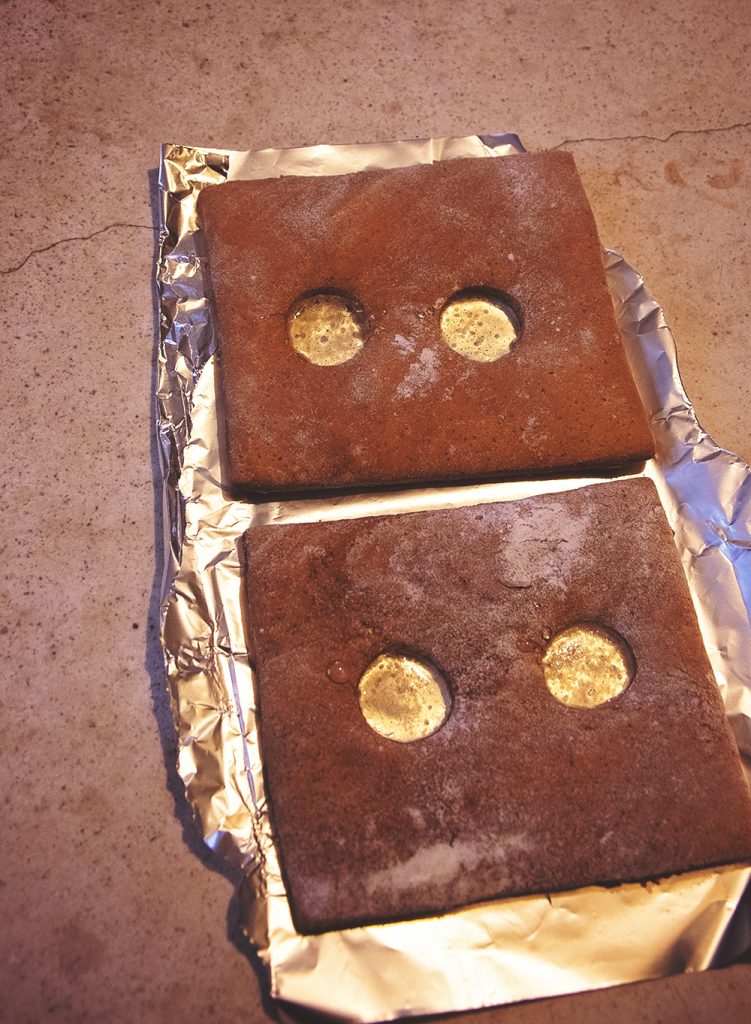 I made windows out of cooking sugar plus water until it was about 150 degrees Celsius. I then poured it into the gingerbread windows (I had lined them with some aluminum foil beforehand) 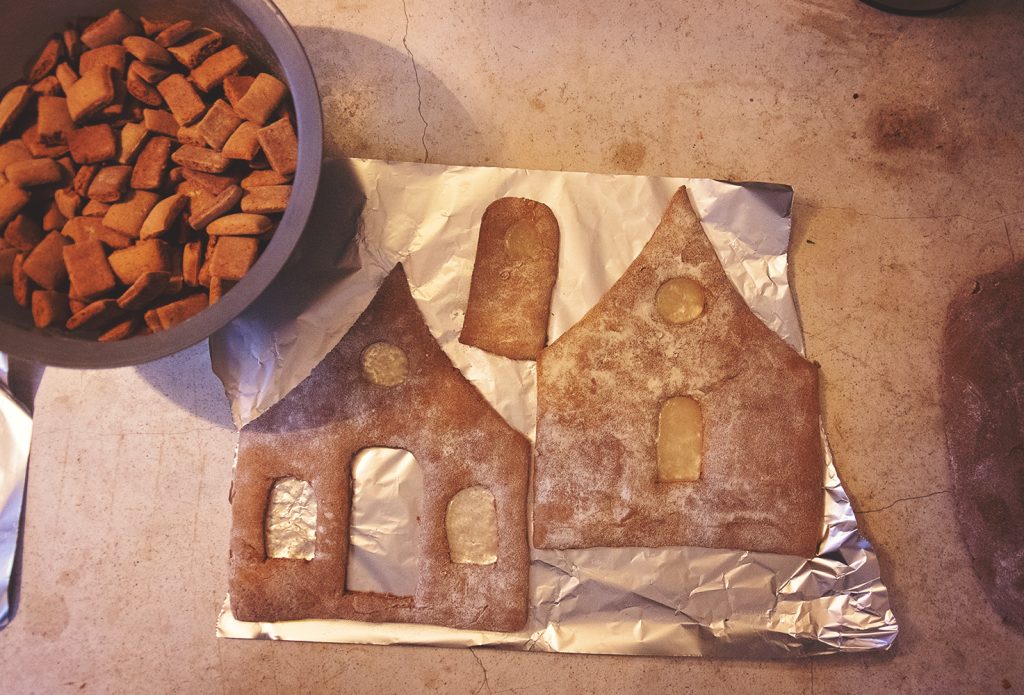 If you stir the sugar when you boil it, it becomes crystallized.  Makes for really lovely gingerbread house windows! 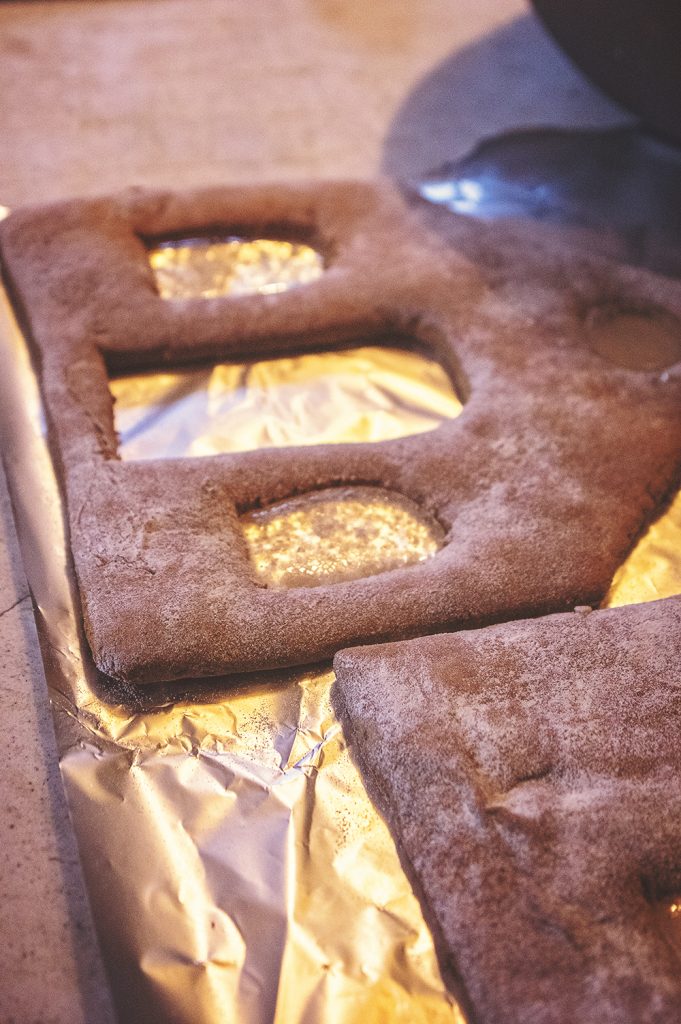 This is from when the sugar was still hardening. It still looked translucent, but when it hardened it turned more opaque. A nice sort of frosty quality. 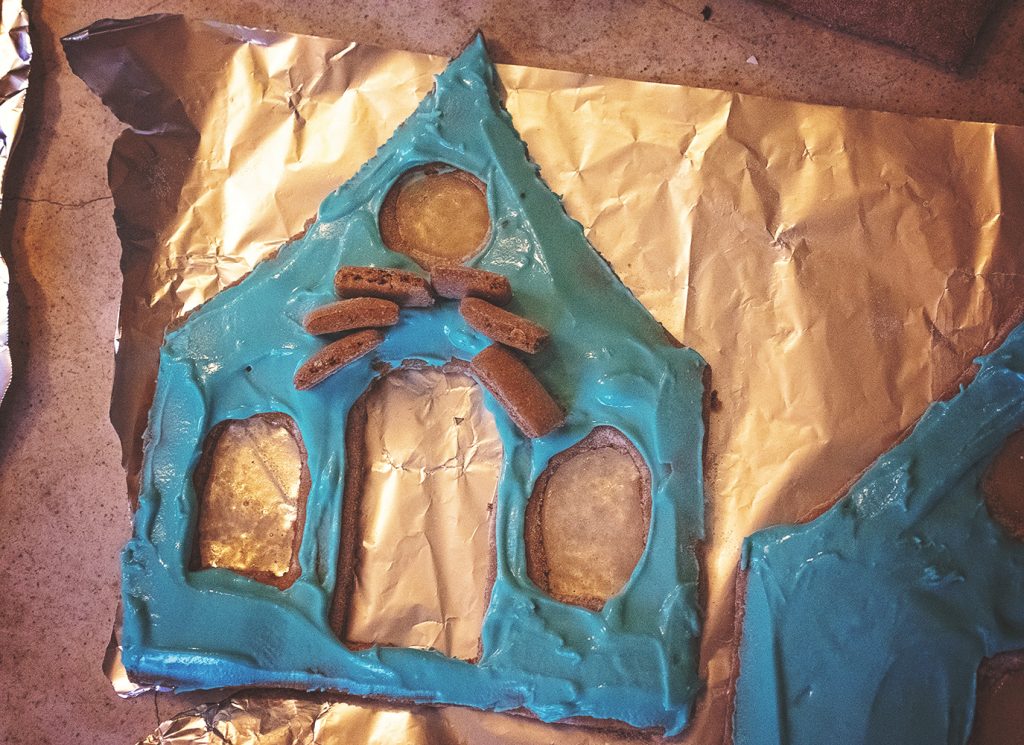 I placed the shingles above the door while the icing was still wet. 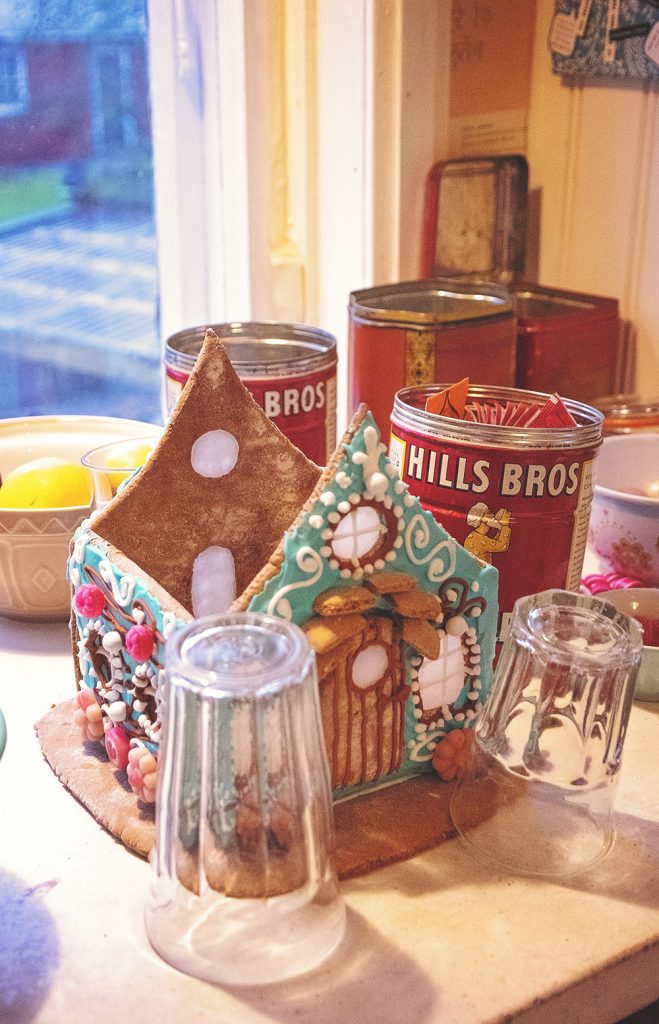 After decorating the sides of the house I used royal icing to glue them together. I propped them up with drinking glasses. 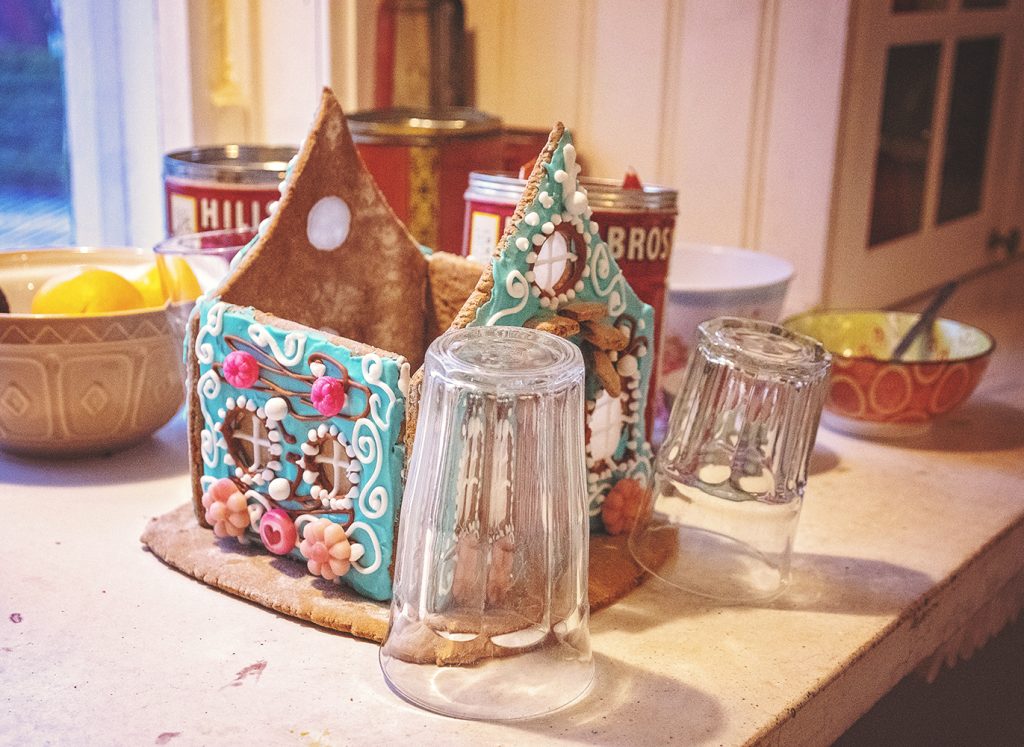 This is a good way to let the house set, and not having to stand there for hours yourself holding the whole thing together! 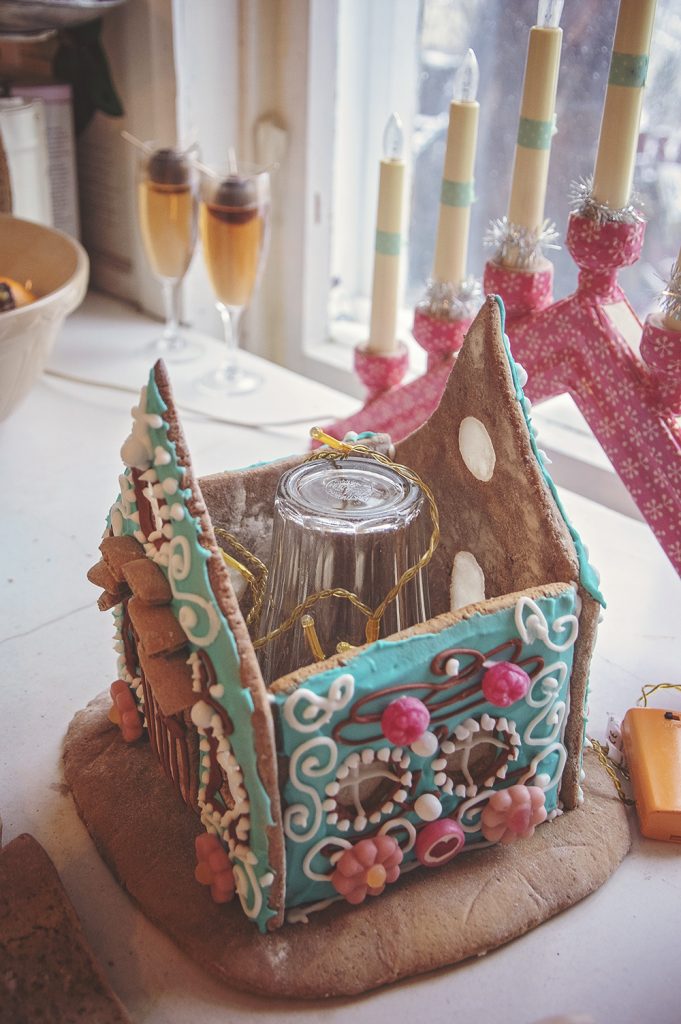 I placed an extra glass inside the house, just in case the roof would turn out to be too heavy for the construction. I also placed a string of fairy lights around the glass. 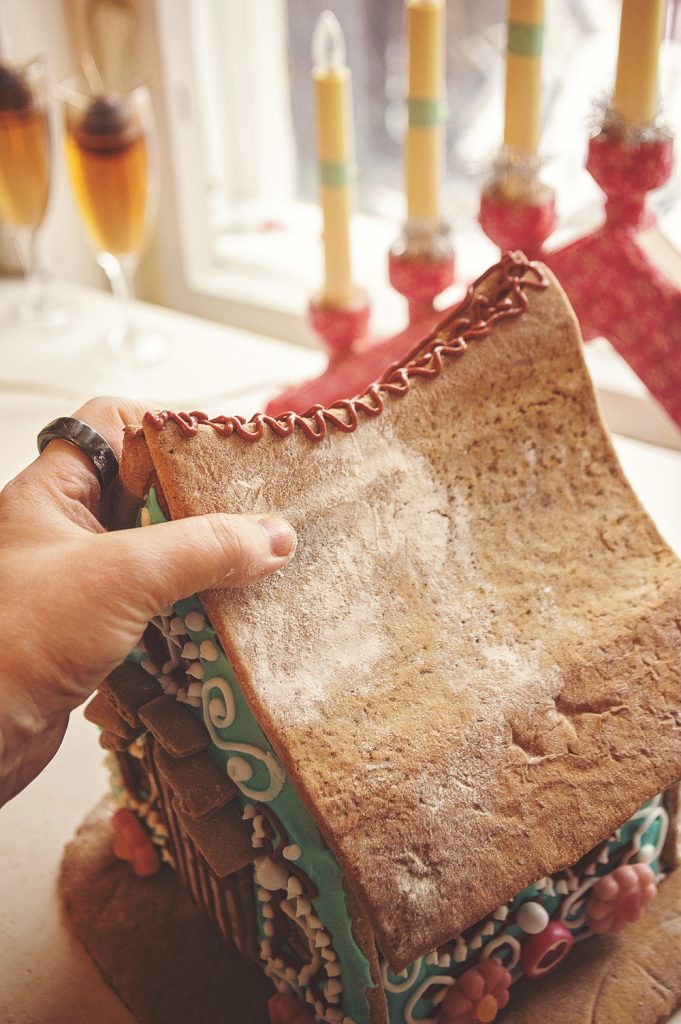 This is me gluing the roofparts together! And yes, I did need to stand there pinching them together for a while! 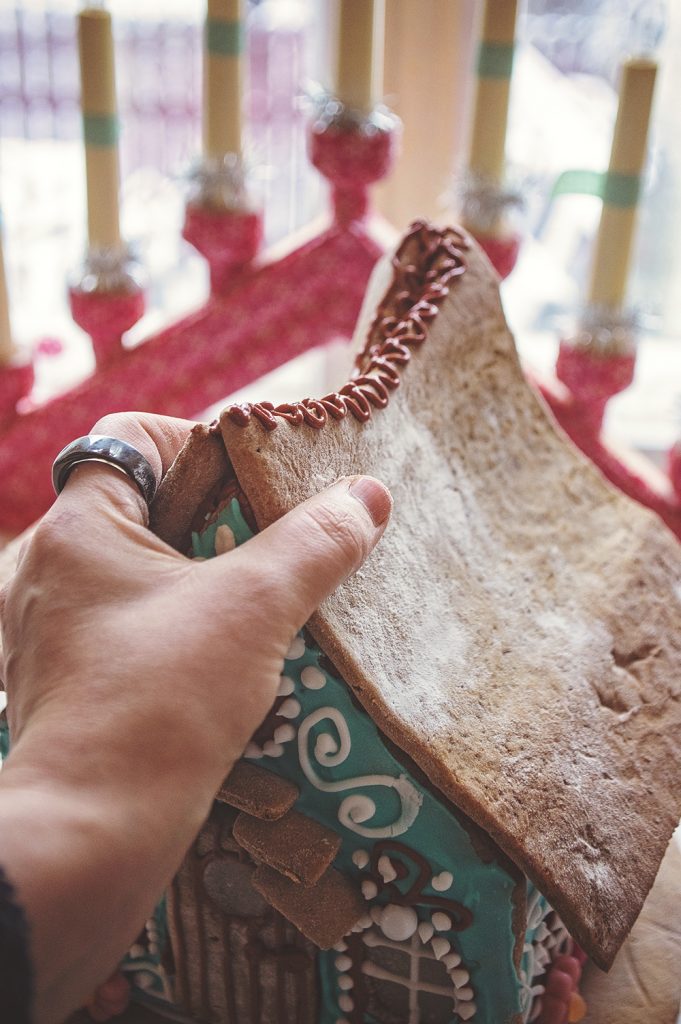 Not too long though – the weight on the roof was still mostly on the house parts, so I perhaps had to stand there pinching them for about five minutes. 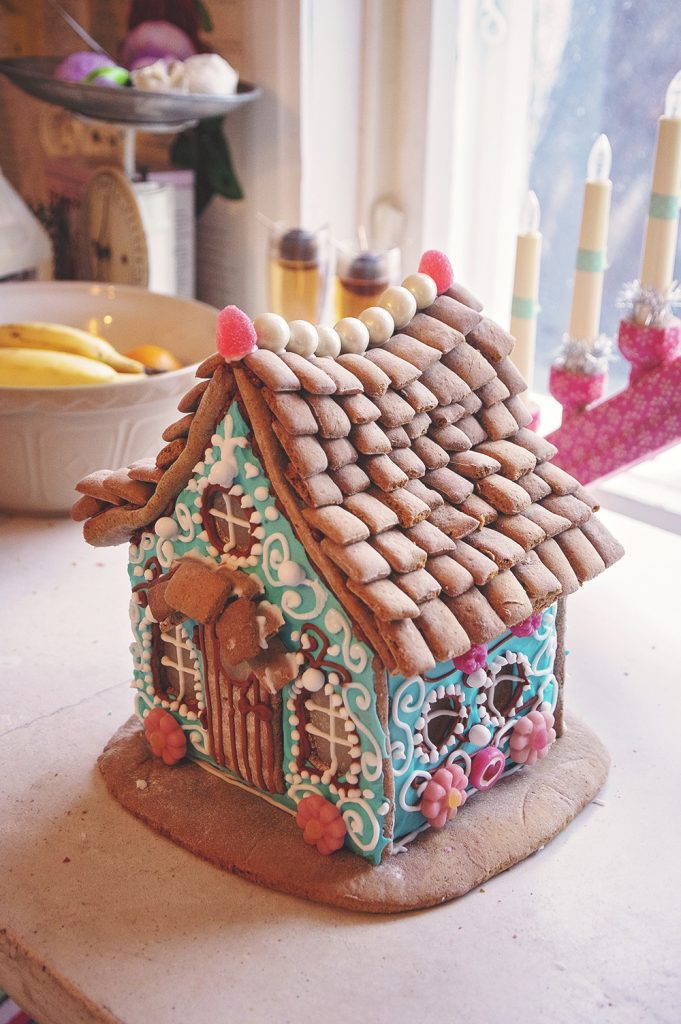 Then I lay the shingles on the rooftop! …and noticed the house was looking less wonky. I had used far too thick shingles, but there you go – you never know how a gingerbread house will turn out. Sometimes the dough rises a lot, and since I’m no baker or chemist I have no idea why that happens! 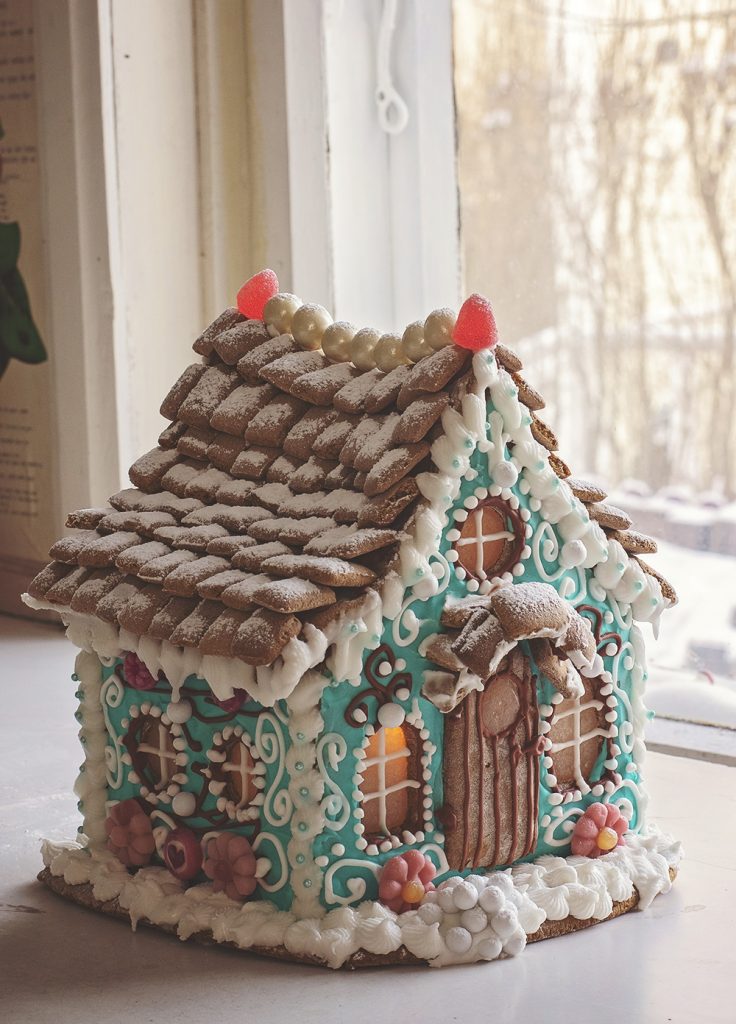 The house got some nice snow in the form of some icing sugar. And then the house was ready for its inhabitant to move in!

One Reply to “DIY Gingerbread House – The Fairy House 2019” 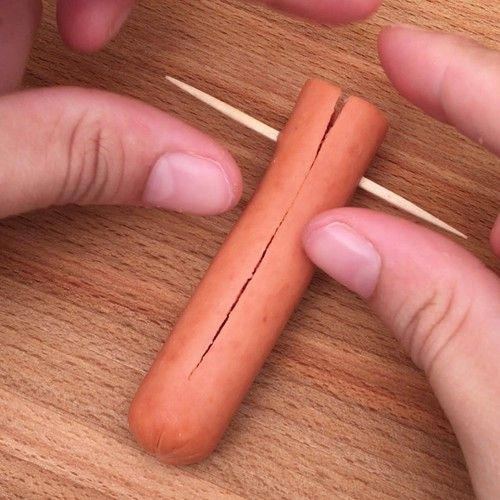 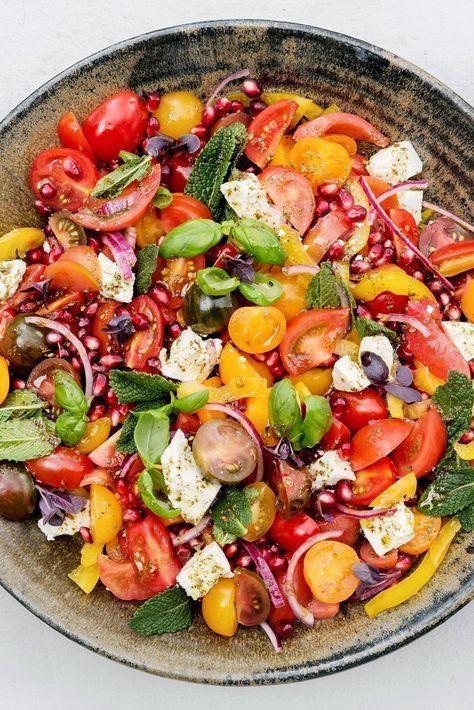 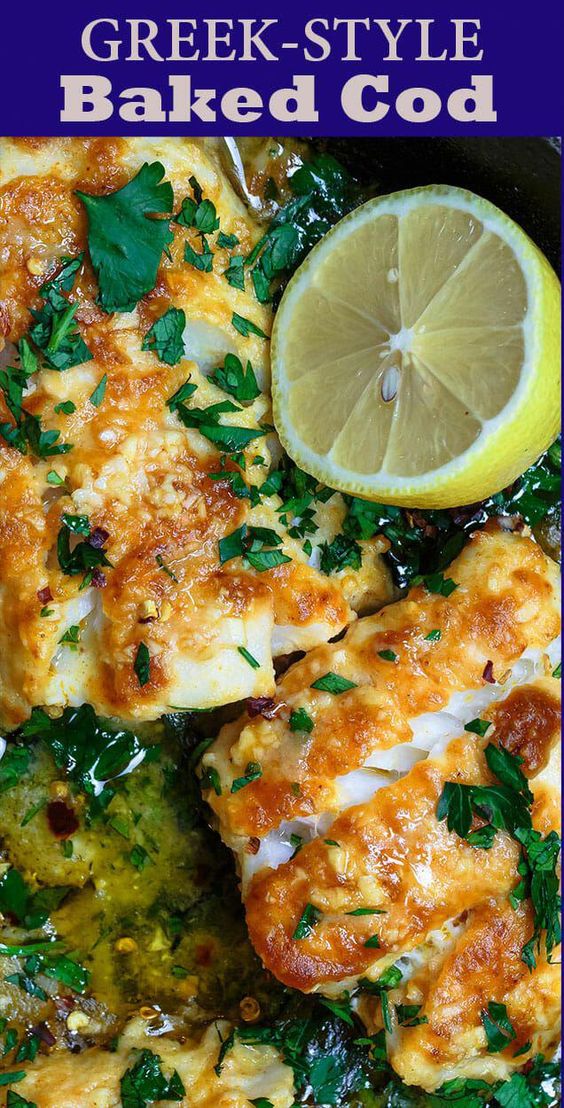 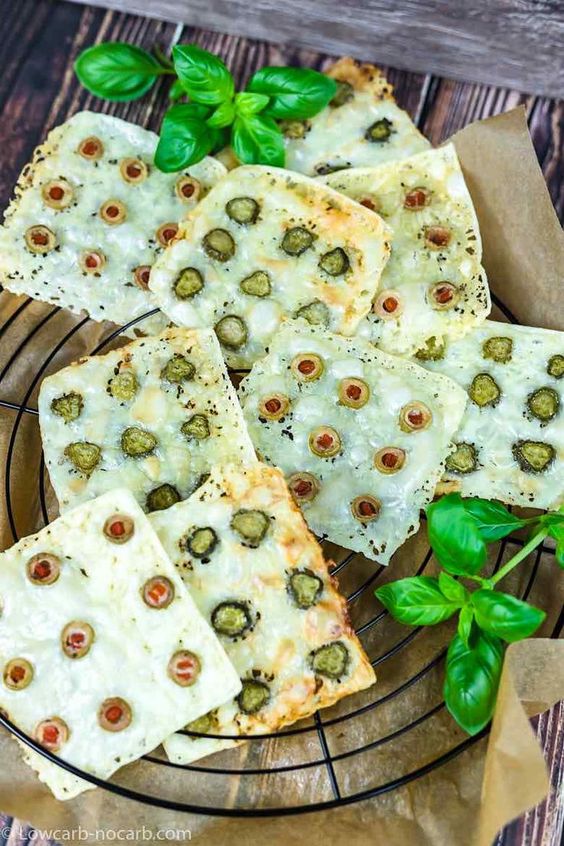 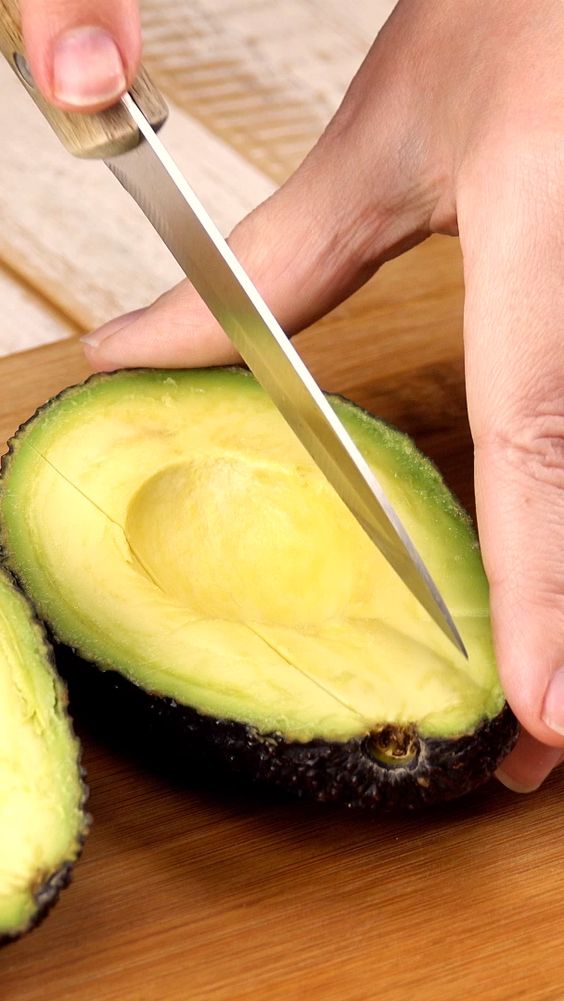 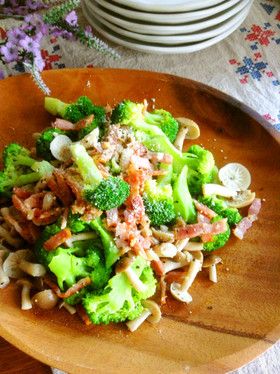 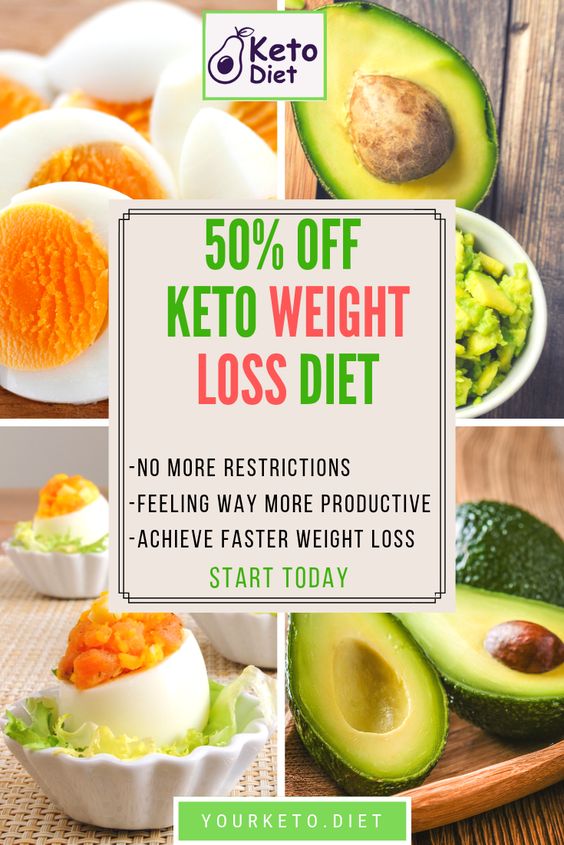 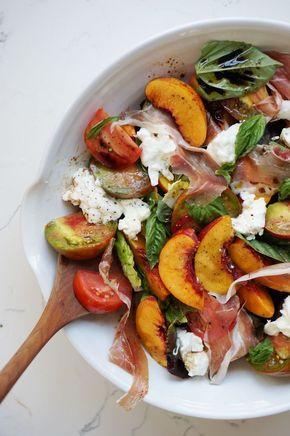 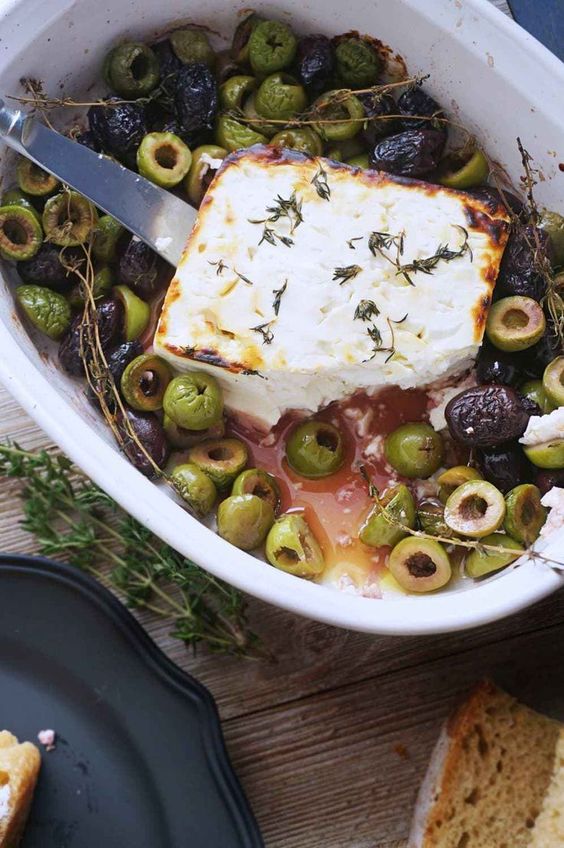